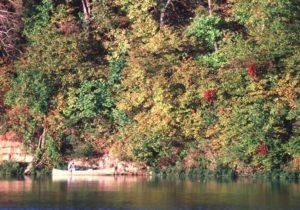 Restoration of a state-owned lake in southeast Iowa has been delayed due to this year’s rainy weather.

“Lake Geode was starting to see a lot of the similar type issues we’ll see in some of our constructed lakes in terms of sedimentation in some of the upper arms, times during the year when people will see algae blooms — kind of a greenness to the water,” said George Antonoiu of the Iowa Department of Natural Resources, the coordinator for the state’s lake restoration program.

Lake Geode was built in 1950 near Danville and is the main feature of Geode State Park. About a decade ago, officials began meeting with landowners in the 10-thousand acre watershed that drains into the lake.

According to Antoniou, 170 landowners are voluntarily keeping livestock out of the area and planting cover crops. Some have built terraces in their fields as well, “to try to protect the lake going forward,” Antoniou said, “and trying to maximize our investment in the lake in terms of shoreline work and removing sediment and things like that.”

Two years ago the next phase started, as Lake Geode was drained.

“We can’t seem to get away from a wet pattern in this state right now,” Antoniou told Radio Iowa. “The lake still has quite a bit of water in it and we’re working on trying to find a way to bring that down a little bit quicker, so that we don’t stand in the way of work here later this summer and going into the fall.”

Lake Geode covers 174 acres. Antoniou expects lake restoration to be completed next spring, addressing erosion along the shoreline and replacing a gate valve below the dam that created the lake 70 years ago.

“We’ve had a really good working relationship with the community down there and we really appreciate their patience,” Antoniou said. “We’re really excited about what Geode’s going to look like once everything is done.”

Improvements to Geode State Park’s campground will be done later this month, but access may be delayed due to weather conditions and road repairs.