You are here: Home / News / Rather than bipartisan friendships, Klobuchar emphasizes results 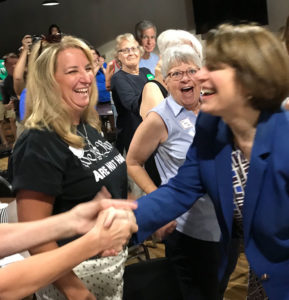 Minnesota Senator Amy Klobuchar is the first of nine Democratic presidential candidates planning to campaign in Iowa this week, heading into a flurry of festivities surrounding Independence Day.

Klobuchar started out this afternoon speaking to a crowd of Democrats in Atlantic, mentioning her appearance in last week’s candidate debate in Miami.

“I really enjoyed it. I was on the first night as you know,” Klobuchar said to cheers. “Our night maybe was a little more tame, as you may have heard.”

Without mentioning the name of any rival, Klobuchar told the crowd she isn’t the candidate who’ll be making a bunch of “huge promises.”

“But I’m going to make some very important bold promises and that is that I’m going to have your back — and you can see all our plans on our website,” Klobuchar said, “that I’m going to tell you the truth, that I am someone that will govern with integrity.”

Klobuchar later told reporters candidates need to make sure what they promise can get done soon after they take office. And she seemed to strike a contrast with former Vice President Biden, who has touted his ability to work across party lines.

“It’s not a goal just to say: ‘Hey, I get along with people,'” Klobuchar said. “That’s great. O.K., maybe that’s fun if you want to, like, go out for dinner or something, but it won’t accomplish anything. What matters is what are the results and if one of the ways to get results is to push the envelope on the first 100 days, I’m going to do it.”

In the months leading up to Iowa’s 2020 Caucuses, Klobuchar said she’ll be “all over” Iowa in the same way she’s campaigned in neighboring Minnesota.

“I’m used to visiting a lot of counties,” Klobuchar said. “I do it every year in Minnesota. I visit all 87 counties every single year.”

Klobuchar’s campaign is hosting a potluck tonight in Adel. One of her staffers is using Klobuchar’s recipe for a “hot dish” featuring tater tots and pepper jack cheese. Klobuchar won a “hot dish” contest with the recipe a few years ago.