You are here: Home / News / Tornado risk starts to drop as we enter July 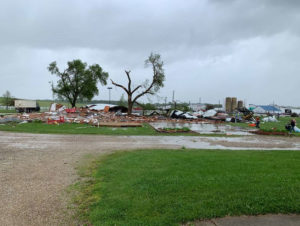 Damage left over from a tornado in Charles City.

While tornadoes can strike during any month of the year in Iowa, the peak months are April, May and June.

Now that we’re into July, the risks diminish slightly. Meteorologist Brooke Hagenhoff , at the National Weather Service, says Iowa had zero tornadoes during April and didn’t see this year’s first twister touch down until May 22nd.

“We got off to a quicker start after that. We had quite a few tornadoes toward the end of May, although those were all relatively short-lived and weak,” Hagenhoff says. “For the month of May, we had 25 tornadoes and for June, just eight tornadoes across the state of Iowa.”

We’re never out of the woods with tornadoes, so she urges people to remain vigilant, though at the moment, Iowa is well behind normal for twisters. “Each year can fluxuate. Our average for the state of Iowa is usually around 48 tornadoes,” Hagenhoff says. “We’re sitting at 33 so far here for 2019.”

A woman from Adair died in the May 22nd tornado. The past few years, Iowa had above-average numbers of tornadoes, with 55 in 2017 and 69 last year. July 19th of last year brought an outbreak of very large, destructive tornadoes to Marshalltown, Pella and Bondurant.

Tornadoes have hit Iowa during the fall, too. For example, a twister tore through Belmond in October of 1966 and Stratford in November of 2005.