You are here: Home / Fires/Accidents/Disasters / Families of fallen firefighters, police officers will benefit from new program 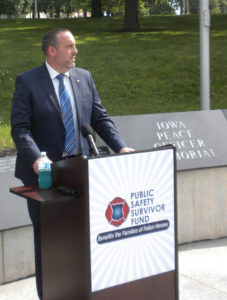 He says most often the gap is the loss of health insurance for surviving family members. “Either because the law enforcement agency is small and cannot bear that burden. Or there was just other limitations that prevented that family from continuing to experience insurance benefits,” Bayens says.

Bayens says the fund fills the gap by helping pay for the insurance. “This fund jointly serves the interest of law enforcement and fire services. It is a fund solely dedicated to the surviving families. It is dedicated solely in the recognition of the sacrifice that the men and women of law enforcement and fire services made in protecting all Iowans,” according to Bayens. 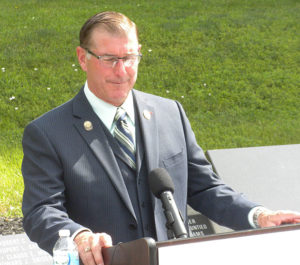 State Representative Mike Sexton of Rockwell City was one of the lawmakers who pushed for the program after hearing from the wife of slain Rockwell police officer Jamie Buenting, who was shot to death in 2013 during a standoff. Sexton also knew slain Urbandale officer and Rockwell native Justin Martin.

“I can still see Jamie coming into Casey’s when I was in there having coffee and we would talk about issues. Justin Martin, before I got elected to this position I was president of the school board and I was standing on the stage when he walked across the stage and got his diploma from high school,” Sexton says.

Sexton says it is most often an issue in small towns like his where the city budgets aren’t as big.”To be able to offer a small piece of security to the families of fallen firefighters and fallen police officers and peace officers — when that loved one is gone — if we can just step up and says ‘you don’t have to worry about insurance any more’, I feel good about that,” Sexton says.

Representative Wes Breckenridge also help push the program through the legislature. He is a retired police officer from Newton.
“We hope we never have to utilize this program, that is our goal, is never have to use it,” Breckenridge says. “But knowing that it is there and the comfort that it will give and ease some of the burdens of those families if they lose a loved one in the line of duty — it’s a small token that to be there for them.”

Sexton and Breckenridge credit the Iowa Lottery for coming up with the plan to provide $100,000 to fund the program. Lottery CEO Matt Strawn says the money will come straight out of lottery funds. “Historically what we’ve found over the years with the lottery, that just having a dedicated benefit works much better and more efficiently to provide resources rather than having a specifically themed ticket or game for a cause,” Strawn says. He says tried the targeted approach for the Veterans Fund.

“That had marginal success. So, it was much more efficient to get resources to those causes by a straight proceeds transfer of $2.5 million a year to the Iowa Veterans Trust fund,” Strawn says. “So this is modeled along similar lines.”

The Iowa Lottery will make its first $100,000 transfer to the Survivor Fund in late October as part of its initial quarterly proceeds transfer to the state for the 2020 fiscal year. It will continue to transfer proceeds to the fund each October.