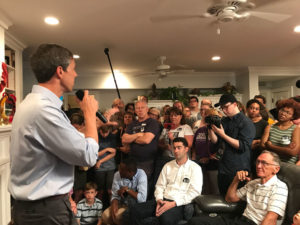 “For those of you who wonder what we do in the face of this injustice and this torture that we are visiting on our fellow human beings at the U.S./Mexico border, just know there is powerful precedent before us of people standing up at these moments of truth to force the hand of this country,” O’Rourke said.

On Sunday, O’Rourke visited a migrant detention facility in Clint, Texas, where there have been allegations of mistreatment. Tonight, O’Rourke spoke to an audience in Ames. He cited pivotal events during the civil rights movement of the 1960s and emphasized that today — July 2nd — is the 55th anniversary of passage of the Civil Rights Act.

Joan Bolin-Betts hosted O’Rourke and about 150 Iowans in her Ames home this evening. She’s a former Republican — and the GOP’s nominee for state treasurer in 1998 — who has endorsed O’Rourke.

“His attitude is that what’s important is to talk to people and find out what they think,” Bolin-Betts told Radio Iowa, suggesting O’Rourke reminds her of former Governor Robert Ray. “I also think he isn’t going to just buy into giving everything away, which is a real problem right now in the Democratic Party.”

Dakota Carpenter, a graduate student at Iowa State University, is a registered Republican who listened to O’Rourke tonight as she looks for “a moderate candidate” to support in 2020.

“Someone who I think will work to listen to both sides, reach across the aisle to get things done,” Carpenter said. “I think immigration is something that’s really important to me…ultimately working to create a just society for everybody.”

“That’s an unfair comment. I mean, clearly we have members of Congress down on the border who are connected to many of these communities. I think that’s the the kind of rhetoric that isn’t helpful in this situation,” Ryan said. “We need to come together and solve the problem.”

Ryan said President Trump needs to “do the mature thing” and address the humanitarian crisis at the border.

“Kids laying with the flu for weeks…Diapers not changed. It’s really unacceptable and there’s really no reason why he can’t challenge doctors and nurses to come help put a Band-Aid on this in the short-term and fix the problem. I mean, this is a solvable problem,” Ryan said. “We need the resources down there, but we’re already spending a lot of money and clearly it’s not being spent wisely.”

Ryan said rather than cut foreign aid to Central American countries, as Trump has ordered, it’s time to send “a few million” down there to stabilize the region migrants are fleeing.

Ryan and O’Rourke are among the nine Democratic presidential candidates who’ll be campaigning in Iowa this week.