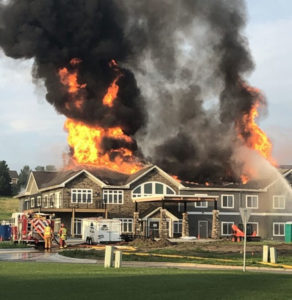 The River View Ridge Living Center in Rock Valley was destroyed by fire.

A newly constructed assisted living facility in Rock Valley was destroyed by fire today just weeks before residents were to move in.

Rock Valley Police Chief Monte Warburton says they were called to The River View Ridge Living Center around 6 a.m. He says the operators were preparing to show it off.

“I think they were slated for an open house next week I believe — residents were going to be in here in two weeks,” Warburton says. “Fire broke out on the east side.” The cief says the building was burning pretty good when he arrived on the scene.

“I would guess the flames were probably 50 feet up off the roof. Very intense heat,” Warburton says. Firefighters from four different departments were on the scene for more than four and a half hours. “It took them quite a while for them to get the fire under control, it was a large fire,” Warburton says.

There were no injuries reported and fire investigators are still trying to determine the cause of the fire.