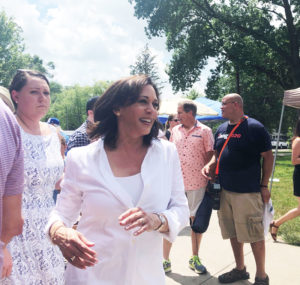 California Senator and presidential candidate Kamala Harris today called President Trump a “predator” who is testing the “noble ideals” on which America was founded.

“This day that we celebrate our independence is a day to reflect on the fact that, one, our framers imagined a moment like this…where our democracy would be challenged,” Harris said this afternoon.

Harris has returned to the Iowa campaign trail this holiday week buoyed by a strong performance in the opening round of debates among the Democratic candidates. During her first public remarks in Iowa this week, Harris again presented herself as a prosecutor who can take President Trump to task for trying to “roll back the clock” in America.

“We cannot turn back the page any longer,” Harris said at a picnic hosted by West Des Moines Democrats. “We’re ready to write a new chapter.”

“The fact that we are seeing momentum grow across the country is something that I’m very proud of. We have a great team here on the ground in Iowa and across the country,” Harris said, “and so progress is good.”

Harris is among nine Democratic presidential candidates who will set foot in Iowa this week. President Trump is scheduled to speak from the steps of the Lincoln Memorial in Washington, D.C. and Harris questions that decision.

“I don’t think he understands this is America’s birthday, not his birthday,” Harris told reporters.

Harris suggested Trump would better spend the day thinking about how to avoid military conflict rather than showcasing the weapons of war in a D.C. spectacle.

“This president, seemingly without much reflection or thought, is prepared to send our troops to various places around the world, based on his unilateral actions and decisions about our relationships with various countries, including most recently Iran,” Harris said.

Harris will campaign Thursday in Indianola and Council Bluffs. On Friday, she’ll hold a town hall meeting at a church in Sioux City.