You are here: Home / Fires/Accidents/Disasters / Residents of Rock Valley facility left with a lot of questions after fire 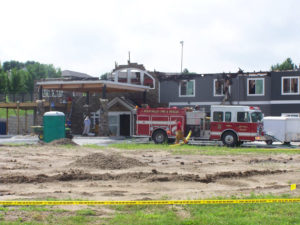 Residents who were preparing to move into a new senior living center in Rock Valley are trying to deal with the shock of a fire Tuesday that heavily damaged the facility.

The board president for the RiverView Ridge Senior Living Center says, Todd Van Tol, says this is hard for the community as they were preparing to open after at least three years of work. “There’s a group of people who have sold their homes that are expecting to move there in the next 30 to 90 days. So essentially their home was burned down. So we’ve got to help them come up with the next plan, Tol says.

The police chief estimated flames were shooting 50 feet in the air when he arrived on the scene around six in the morning. Van Tolsays 14 of the 40 rooms had already had tenants. The initial assessment was that the building was a total loss — but Van Tol says they will look at what is left. 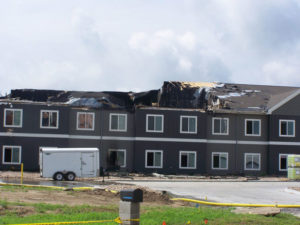 “I don’t have all the answers yet, but it’s pretty devastating for at least three-quarters of the building,” Van Tol says. “We’ll have to see what we can do with some of the rest of it with smoke damage and that kind of stuff, but right now it’s incredibly devastating.”

The center was built to help with a shortage of assisted living options in Rock Valley and the nearby area.
Van Tole says the board will be meeting with its insurance company and hopes to see it rebuilt. There is not word yet on the cause of the fire.