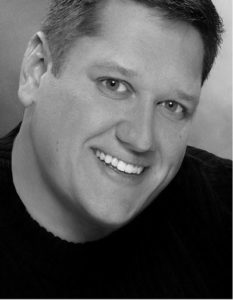 An Uber and Lyft driver from Des Moines will open Iowa’s largest single-day concert event tonight on the West Terrace of the Iowa State Capitol.

“I’ll tell you, it was hot,” Oakden says, laughing. “It was warm that day. They did it outside so it was really interesting with all the art week people walking down the street and not knowing if they should take their hats off for 20 people singing the National Anthem. It was a great time.”

Many singers have bemoaned how difficult it is to perform “The Star Spangled Banner” because of its pacing and the wide range of high and low notes. Oakden agrees, to a point. “It’s a tough song to sing mostly because of the pressure, I think,” Oakden says, “because you don’t want to be the one to screw up the National Anthem.”

There’s another element of pressure given the anticipated size of the audience for tonight’s event, as it typically draws 100,000 people. Oakden sang opera professionally, touring for 15 years, and has performed on many stages, but never before a gathering of this size. “No, this will be the largest crowd,” Oakden says. “Before, it would’ve been maybe four or 5,000 in a theater. Yeah, 100,000 is quite the number of people.”

The 43-year-old Oakden says he’s “retired” from opera and now earns his living through a combination of taxiing passengers around in his car via ride-sharing apps, and helping to run both an escape room business and a haunted house attraction. He came in second-place in last year’s “Oh Say, Can You Sing?” competition and says he’s thrilled to have won tonight’s rare opportunity.

“When it comes to singing and performing, it just comes naturally to me,” Oakden says. “As for mentally preparing for it, I’m just getting excited for it.” The free outdoor concert opens at 8:30 p.m. and will culminate with the rocket’s red glare of fireworks over the Des Moines skyline.