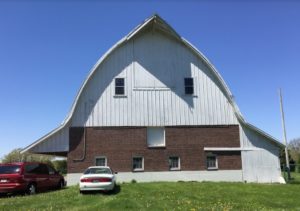 There are thousands of barns on farms across Iowa’s landscape, but none that are quite like the structure in eastern Iowa’s Muscatine County near Discovery Park.

Jeff Morgan, spokesman for the Iowa Department of Cultural Affairs, says the big dairy barn, built of red brick and white-painted boards, is now listed on the National Register of Historic Places.

The barn’s historical significance is tied to the Poor Farm, which was created in 1883 by the county where “‘unfortunates” who could not care for themselves were cared for at taxpayer expense. That included the poor, elderly, and those with physical or mental disabilities. Like all of Iowa’s Poor Farms, the Muscatine County Home was largely self-supporting because its agricultural production provided food for residents and extra provisions for sale that funded its operating expenses.

While it’s 95 years old, Morgan says the barn is in excellent condition. 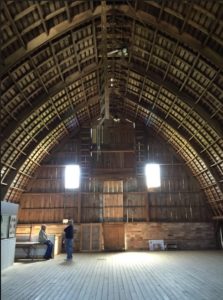 “It has a curved gothic roof that’s a very pleasing appearance with a brace-free hawmow,” Morgan says. “It was the culmination of decades of effort on the part of farmers and agricultural engineers to find loft space in a light-framed, two-story-type Midwestern barn that could house dairy herds and milking facilities.”

The barn’s placement on the National Register marks an important milestone, he says, as Muscatine continues to preserve the legacy of its past for future generations to enjoy.

“It’s noted for its use of concrete in the barn construction,” Morgan says. “It reflects Iowa’s turn to modern mechanized systems for livestock care and sanitary conditions by use of concrete flooring.”

The barn is also recognized for originally being outfitted with equipment like cow stanchions and a hay carrier purchased from the Louden Machinery Company in Fairfield. Because Louden provided architectural plans to all of its equipment customers, the barn was most likely built with the company’s plans.