You are here: Home / Outdoors / Boone River is the focus of Project AWARE clean out 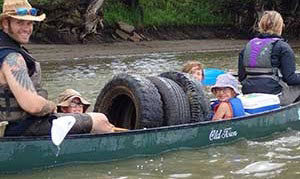 Hundreds of volunteers will spend much of the next week in canoes, working to clear trash out of the Boone River in north-central Iowa.

Brian Soenen is coordinator of Iowa Project AWARE, which stands for A Watershed Awareness River Expedition.
“We expect over 350 volunteers to converge on the Boone River,” Soenen says. “We’ll be traveling through its watershed between Goldfield all the way through Bell’s Mill Park.”

The volunteers will haul junk out of the river that travels through Wright, Hamilton and Webster counties.  “As they paddle down, they’ll be scanning the river bottom and stream banks for any garbage that’s sitting there that shouldn’t be,” Soenen says. “They’ll be loading it into their canoes and paddling it down to where we’ll be able to pull it out.”

This is the 16th year for Project AWARE and Soenen says interesting items are often brought from the depths. “Historically, that garbage is as small as a glittering wrapper they might find on a sand bar to as large as a car frame they might find sunk on the bottom,” Soenen says. “There’s tires, scrap metal, you name it.”

The project begins Sunday and will run six days. Soenen says there will be free nightly educational programs on the environment at the Briggs Woods Park campground south of Webster City.