You are here: Home / News / From Model Ts to Mustangs, rare cars from 1987 on back go on display at Iowa State Fairgrounds 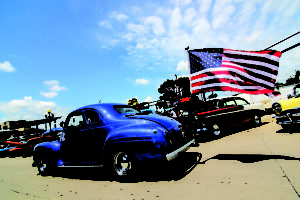 Several thousand shiny, vintage vehicles will be cruising along Iowa’s highways and interstates this holiday weekend from all directions, headed for the annual summer car show in Des Moines. Betsy Bennett is spokeswoman for the Goodguys Heartland Nationals which opens today at the Iowa State Fairgrounds.

“We’ll have around 4,000 hot rods, customs, classics, muscle cars and trucks,” Bennett says. “The cutoff year for this event is 1987, so everything is ’87 and older. They come from all over the United States for this event. Last year, we had cars from about 30 states.” The three-day event typically draws up to 50,000 spectators during the weekend.

In addition to the hundreds of cars, many of which date back several decades, one of the big draws is the Duel in Des Moines on the AutoCross track. It’s a closed performance race course where vehicles are paired off in various shoot-out classes to compete. 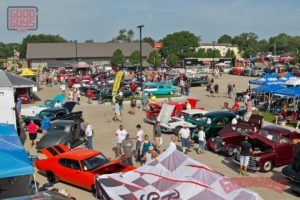 “The shoot-out is, you’re disqualified if you’re not the fastest of that pair,” Bennett says. “You’re really racing the clock and you’re also racing your own skill level on the course. It’s a lot of fun to watch. The shoot-outs typically happen around 3 o’clock on Saturday, so it’s something for people to check out when they’re there.”

The Goodguys Nitro Thunderfest dragster exhibition promises to bring old-school drag racing to life. There are also vendor exhibits, a manufacturer midway, a used auto parts swap meet and a cars-for-sale area. For family members who aren’t as interested in the show cars, there are all sorts of other activities.

“We really try to build our events into a festival atmosphere,” Bennett says. “There’s a kids zone with face-painting and a model car show for kids. The Central Iowa RC Addicts Club puts on this amazing remote control car expo that’s really fun.”