You are here: Home / News / Most in crowds at candidate events have not chosen a favorite yet 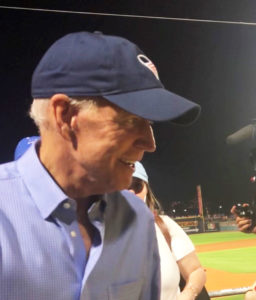 By the end of this week, nine Democratic presidential candidates will have passed through the state and, so far this year, the party’s two dozen candidates have appeared at more than 600 events here.

Gene Brown, an independent voter who lives north of Fort Dodge, has been checking out a few of the Democratic candidates, hoping to find a uniter.

“I’m looking for a candidate who can move this country forward,” Brown said after seeing Elizabeth Warren in Ames. “We’ve had a lot of division in this country.”

As he waited at a brewery to see Steve Bullock,Dave Migland of Des Moines said Democrats are reluctant to have a replay of the divisive Hillary Clinton versus Bernie Sanders primary.

“I think we realize being too stubborn about your choice has cost us four years and an eternity in terms of some of the policies,” Miglin said.

Justin Bayliss of Wellman saw all the 2016 candidates in-person and plans to see all the 2020 candidates, too. Bayliss, as he waited to see a candidate in Keokuk, said he was impressed with Kamala Harris, but he said some of the others just don’t have the “it” factor.

“There are some of the candidates that they just don’t have a real presence,” Bayliss said. “I really don’t feel like if they were elected that they would get the job done.”

Phyllis Weeks of Albia wore a 2016 “Draft Elizabeth Warren” t-shirt to a Warren event in Oskaloosa, but Weeks is still considering several other candidates.

“Well, only because it’s early,” Weeks said, adding she has enough candidate t-shirts to make the blocks for a large quilt.

Douglas Mihelich of Ames is a Minnesota native who’s leaning toward supporting Minnesota Senator Amy Klobuchar, but he’s listening to other candidates.

“I want a like rational, sane candidate. I think that would be a refreshing thing and also someone who’s very moderate,” Mihelich said as he waited for Beto O’Rourke to speak earlier this week. “A lot of our current leaders have either pushed our nation either far left or far right.”

The first big national event of the season has occurred, as 20 candidates appeared over two nights in televised debates organized by the Democratic National Committee.

“I DVR’d the debates and am working my way through them,” said Bri Woodbeck of Roland who has two jobs and didn’t have time to sit down and watch two hours of live T-V on one night and two more hours the next.

Shawnah Nipper brought her toddler to see Klobuchar and Harris at a picnic in West Des Moines on Wednesday.

“We have, for the first time, multiple women candidates. That’s like amazing steps forward,” Nipper said. “I want her to grow up knowing she has opportunities.”

Iowans in western Iowa have an opportunity to see another candidate, Julian Castro, on Sunday and Monday.