You are here: Home / News / Work continues to get all southwest Iowa roads back open 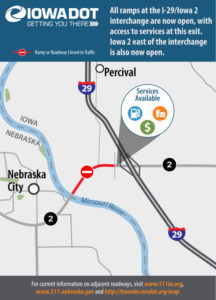 More roadways that have been closed by flooding for months in southwest Iowa are back open. DOT planner Scott Suhr says they’ve reopened the Interstate 29 and Iowa 2 interchange.

“You can get from essentially I-29 west all the way to U.S. 275 — which was previously closed — and then you can get on Iowa 2 and go from I-29 to 210th street. But beyond that we’ve still got pavement that’s missing. He says they hope to be able to replace the missing pavement soon.
He says they are hoping to let a contract next week to get that and other work done.

“At least there’s some mobility at the interchange, which there wasn’t previously,” he says.
Suhr says they are looking to get traffic going on Iowa 2 again.”We’ve got pieces of Iowa 2 that six to 800 feet of pavement are missing in the eastbound and westbound lanes,” Suhr explains. “And our plan is to try to restore mobility in the westbound lanes and we’re hoping to let a contract — maybe as early as next week — and hopefully we can get at least the westbound head-to-head going so that people can get over from Nebraska City into Iowa.”

They will have to do more work on Highway 34 too. He says they have some areas where traffic is head-to-head in the eastbound lanes of Highway 34 as there is still water covering part of the westbound lanes.

All Interstate 29 ramps are now open. Suhr says they are looking at some long-term improvements to Iowa 2 to help deal with any future flood damage.