You are here: Home / News / Iowa Lottery leader expects a strong year when books are closed 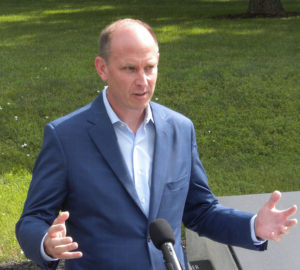 Iowa Lottery CEO Matt Strawn says the fiscal year that ended June 30th was a good one for the organization.

Strawn declined to give an actual figure, as he says the numbers aren’t yet final. “The Iowa Lottery is well positioned to have one of the strongest years it’s ever had in terms of not just sales — but in terms of proceeds it is able to deliver to the state,”Strawn says.

The lottery reported total sales of 371 million dollars in the previous fiscal year and the second highest amount ever returned to the state at $87.1 million. The Iowa Lottery had projected in budget discussions that $70 million in profit that would go to the state.

Strawn says the projection can be impacted by big jackpots that drive up sales.”That’s the challenging thing when you are putting budgets together, trying to rely on accurate revenue assessments for the lottery. So much of it ebbs and flows on whether it’s a big jackpot,”according to Strawn.

The big jackpots do impact the bottom line at the end of the fiscal year, but the original scratch ticket is still the top seller.
“Last fall we had that huge Mega Millions jackpot which really drove sales at the end of last year. But, at the end of the day, the bread and butter of the Iowa Lottery still remains those old school scratch tickets,” Strawn says. “Iowans like going into their convenience store, the grocery store and buying one of those scratch tickets and having some fun with it.”

Strawn was appointed by the governor in January to take over leadership at the Iowa Lottery following the retirement of previous CEO Terry Rich.