You are here: Home / News / Hickenlooper to keep pushing through Iowa, to ‘turn the tide’ of campaign 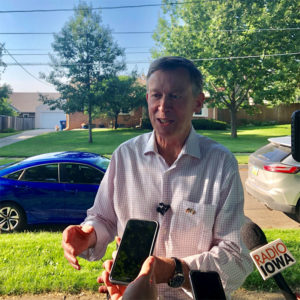 Former Colorado Governor John Hickenlooper says his first abandoned foray into property development taught him not to give up on “a great idea,” like his current campaign for the White House.

“I’m going to keep pushing as long as I feel people are hearing something in me that for them is a solution to this crisis of division,” Hickenlooper said tonight, “all this animosity that this country’s filled with right now.”

Many of Hickenlooper’s national staff and advisers recently left the campaign after urging the 67-year-old to run for Colorado’s U.S. Senate instead. Hickenlooper said his calculation might be different is there weren’t “several other top-flight candidates” poised to challenge incumbent Republican Cory Gardner.

Hickenlooper, in making the case for his own presidential bid, said throughout his career he’s faced critics who say he’s not the right person for the job of running a brew pub, being mayor of Denver or governor of Colorado, but he persevered.

“How do you win if you’re at one percent in the polls nationally? You win Iowa,” HIckenlooper said. “That’s how you win. You go out and you walk back and forth across Iowa and you drive cars across Iowa and you convince people that…you’re the best person for the job and…that you can win Iowa and most people in Iowa they feel that if you win Iowa, you’re going to become the next president.”

Hickenlooper closed his question-and-answer session with reporters by saying he may not be the smartest candidate in the race, but no one will work harder.

“There’s not slick slogans and you know it’s going to take a while to turn the tide, but I believe I am different than anybody else,” Hickenlooper said, “and I think when people get to know that and hear it, they’ll begin to talk about it to their neighbors.”

Hickenlooper, who spoke to crowds in Des Moines, Creston and Ottumwa today,  describes himself as a “pragmatic progressive” and argues he can win in swing states Donald Trump won in 2016.