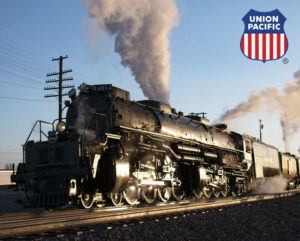 The world’s largest steam locomotive will be chugging across Iowa this month, carrying a full load of passengers.

The 1940s-era locomotive known as Big Boy Number 4014 will steam from one end of Iowa to the other during its tour. Tim McMahan, a spokesman for Omaha-based Union Pacific, says there will be fans of historic trains at every stop along the way.

“We’re running a sold-out excursion from Omaha on July 15th with whistlestops in Denison, Carroll and arriving in Boone about 3:15 that day,” McMahan says. “July 16th, it’ll depart Boone for whistlestops in Nevada, Iowa Falls and Mason City, where it will depart on the morning of July 17th.”

Later in the month, the locomotive will run another route starting in Clinton on July 30th, with stops in Wheatland, Cedar Rapids, Belle Plaine, Marshalltown, Elkhart and Des Moines. The big locomotive is one of only 25 that was manufactured and it was featured in Ogden, Utah, at a special event back in May.

“Number 4014 is the world’s only operating Big Boy,” he says. “We recently completed its inaugural tour to Ogden for Union Pacific’s 150th anniversary ceremony.” The rare machine was used as a model for photographs to mark the special occasion.
“The Big Boy and another one of our steam locomotives, Number 844, met nose-to-nose to recreate that iconic image you’ve seen, taken on May 10th of 1869 when the last spike was tapped in place at Promontory Point (Utah), creating America’s first transcontinental railroad.”

In addition to the Iowa tour, other stops will be made across Nebraska, Minnesota, Wisconsin and Illinois. Learn more at www.up.com.