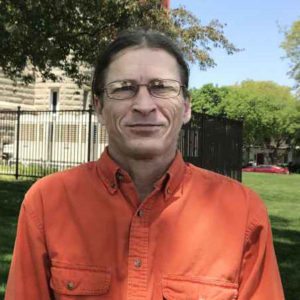 The Adams County Sheriff has agreed to pay $10,000 to a Red Oak man who was charged harassment when he posted a criticism of a sheriff’s deputy on his own Facebook page.

ACLU of Iowa spokesperson Veronica Fowler says the simple misdemeanor harassment charge against Jon Goldsmith was later dropped. She says the settlement will pay his costs associated with that charge. “Jon ended up having to hire a defense attorney to defend himself against the charges. He also has high blood pressure and started having medical problems because of all the stress and the pressure that was created by the situation,” Fowler says.

The Sheriff has also agreed to pay the ACLU’s attorney fees. Goldsmith posted criticisms laced with profanity about how some of his friends were treated by an Adams County deputy at a local festival. The settlement includes a permanent injunction that orders the Adams County Sheriff’s Office to stop criminally charging people who criticize its law enforcement officers.

“Because they have been basically charging people with criminal charges for speaking out against them. And of course, that is fundamentally a violation of the First Amendment,” Fowler says. “The First Amendment was created largely so that citizens can criticize the government.” She says there is also a training requirement. “The department is going to have to undergo free speech training so they understand the principles behind this — why they can’t shut people down when they speak out against law enforcement’s actions,” Fowler says.

Fowler says the Sheriff has agreed to set standards for complaints. “The department has to adopt a social media policy on how it deals with criticisms, what its policy is on its own Facebook page and so forth,” Fowler says.

Fowler says there is a big difference between criticizing the department and threatening them. “Swear words are free speech. And maybe you wouldn’t recommend that someone do that, but certainly it is their right to use profane language. You can’t charge somebody with harassment because they are using swear words or they are angry,” Fowler says. “Of course if they are threatening violence — that is something else. But these posts didn’t even begin to go there,they were just angry.”

The ACLU released a statement from Goldsmith where he says he is glad a settlement was reached and says “It’s ridiculous that I had to get a lawyer to defend my right to free speech. People need to be able to speak up when an officer is doing wrong. The sheriff’s office shouldn’t be able to shut them down just for doing that.”