You are here: Home / News / Boaters urged to steer clear of locks-and-dams on Mississippi River 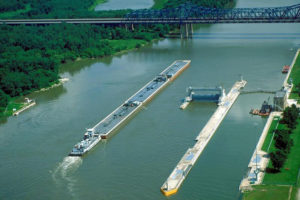 The U.S. Army Corps of Engineers is urging all boaters on the Mississippi River to give locks-and-dams a wide berth due to “crazy” currents lately.

Corps spokesman Patrick Loch points to a close call a week-and-a-half ago when operators quickly deployed a lifeboat because a pontoon was floating toward Lock and Dam 3 near Red Wing, Minnesota.

“We were able to get to the pontoon before it reached the gates,” Loch says. “They were actually able to get the two boaters off of the pontoon to safety.” Loch says Mississippi River boaters should strictly observe the restricted areas 600-feet upstream and 150-feet downstream from dams.

“The currents up- and downstream get kind of crazy and you really don’t know what they’re gonna do, and if you all of a sudden did lose power, you don’t have a whole lot of time to react.” Loch says boaters should be sure to carry extra gasoline, have an appropriate-sized anchor plus enough line to secure the vessel.

They should also carry a marine radio tuned to distress channel 16 because cell phone coverage might be spotty.