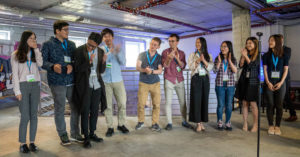 A team of Iowa State University statistics students is back home in Ames after winning an international competition last week in Germany.

Steve Vardeman, an ISU professor of Statistics and Industrial Engineering, says the students won the Data Mining Cup in Berlin, facing off against teams from 28 nations.

“There were two Iowa State teams, one that finished first and one that finished eighth out of 150,” Vardeman says. “These were composed of students from Statistics and Industrial Engineering who took my Stats 602 course, which is a statistical data mining or statistical machine learning course.”

Data mining is the process of discovering patterns in large data sets. Vardeman says the students focused on the subject of fraud protection for the challenge. “They were given a big data set that had various variables describing self-checkouts at a retailer,” he says. “They used that as training data to invent a methodology that would distinguish between fraud and nonfraud, based on the characteristics of how people go through the self-checkout.”

Iowa State is no stranger to the Data Mining Cup competition, which is marking its 20th year. “Students from Iowa State first started competing in this in 2013 and the team was fifth,” Vardeman says. “In 2014, our team came first and that was actually the first time that a U.S. team had ever won this competition.”

In recent years, teams from ISU have also placed second twice in the contest.