You are here: Home / News / Governor says state is making progress in issues with Medicaid program 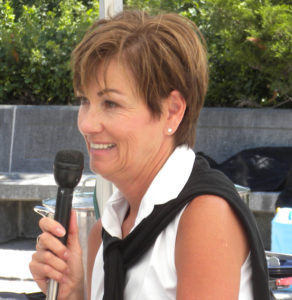 The Iowa Department of Human Services announced that it will pay the insurance providers for the states Medicaid program for low-income and disabled residents an additional $386 million dollars in state and federal money.

Governor Kim Reynolds says the state is still saving money despite the increase in dollars. “The state’s portion — it has gone down about one percent — but since I was sworn in as governor I said my priority was to make sure that we have a sustainable managed care program,” Reynolds says. “That we really were doing everything we could working with some vulnerable Iowans to make sure that we were improving outcomes, that we were increasing access, and that we had a program that was sustainable, not only today, but into the future.”

The state’s portion of the increase is 6.5% or $115 million of the overall $386 million. Reynolds says the increase is part of the negotiated settlement. “We’ve made progress,we’re going to continue every day to reevaluate the program to make sure there’s not other things that we need to do to make it more efficient. We started to stabilize the program. We now have three years of data, so we know what the program costs, so we are not just projecting or guessing. We have actual data that we can base this off of,” Reynolds says.

The system was privatized by then Governor Terry Branstad, who promised it would save millions of dollars. Reynolds was asked about that promise. “But I am not Governor Branstad first of all, I am Governor Kim Reynolds. And when I was sworn into office, I said to the legislature and to Iowa, we made some mistakes moving forward and we’re addressing those,” she says.

Reynolds says she is doing what she promised. “It’s one percent less that’s coming out of the general fund. We’ve started to bend the cost curve. We’ve improved access…we’ve increased what we are paying the providers, in additional to that we are putting in more accountability for the MCO’s,” according to Reynolds. The governor says her administration will continue looking at the information and working to make things better and will expect the others involved to do the same.
“This is a partnership, it’s going to take all of us pulling together,” Reynolds says.

Democrat legislators have been critical of the privatizations of the program and the Iowa Democratic party chair Troy Price issued a statement today that says:
“Apparently Governor Reynolds is more concerned about her reputation than she is about the health of our state or responsible taxpayer spending. Instead of putting resources towards fixing the broken system, Reynolds is doubling-down, handing out bigger raises to MCOs with no accountability for service. Hundreds of thousands of Iowans rely on Medicaid to go to the doctor or afford prescriptions, and our tax dollars should be spent making sure these services work effectively for the people who need them most, not insurance executives.”