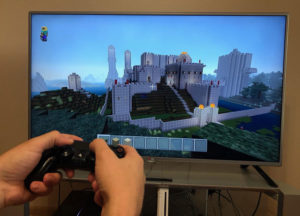 The study divided a group of 352 ISU students into four groups. The first two groups were assigned to play 40 minutes of Minecraft, a game ISU psychology professor Douglas Gentile says is like “virtual Legos.” Another group of students played games, too, however:

“They played a different video game, a NASCAR racing game, again for 40 minutes but here it doesn’t really allow as much creativity. You’re basically driving fast and turning left the whole time,” Gentile says. “And then the fourth condition, we had them watching a TV show.”

Of the two groups playing Minecraft, one was given instructions about the game and turned loose, while the other group was told to be as creative as possible. The study found the students who were given the freedom to play Minecraft without being told to be creative ended up being the most creative. “It’s not just that Minecraft can help induce creativity,” Gentile says. “There seems to be something else about actually having the freedom to be as creative as we want.”

Researchers suspect that being told to be creative may have actually limited the students’ options while playing, resulting in a less creative experience. To measure creativity after the 40 minutes, students were asked to draw a creature from a world much different from Earth. More human-like creatures scored low for creativity and those less human-like scored high.

“There are lots of opinions out there about the effects video games can have,” Gentile says. “Sometimes these opinions can be pretty extreme. On the one hand, some people will say violent video games cause school shootings. No, they don’t. Or that video games have no important effects. That’s also not true.”

Minecraft has sold more than 100-million copies. It allows players to explore unique worlds and create anything they can imagine. Most video games encourage players to practice some level of creativity, according to Gentile. For example, players may create a character and story for role-playing games or be rewarded for creative strategies in competitive games.

He says even first-person shooter games can inspire creativity as players think about strategy and look for advantages in combat. Researchers say it’s important to not disregard the potential video games have as engaging and adaptive educational opportunities.