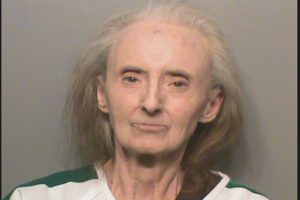 For the fourth time this year, the Animal Rescue League of Iowa is on the scene of a horrendous animal hoarding case. This time, some three dozen “very sick” kittens and cats have been rescued from foul conditions at a home in Des Moines.

Joe Stafford, the ARL’s director of animal control services, says after an initial visit last week, they returned on Wednesday with law enforcement and a search warrant.

“Conditions inside the house were just absolutely deplorable,” Stafford says. “Everything was in disarray, large quantities of junk piled up in various rooms. The home was infested with cockroaches. There were a lot of black widow spiders.”

Specially-trained ARL staffers had to enter the house while wearing haz-mat suits and respirators, as ammonia from the cat urine made it difficult to breathe. Temperatures were near 90 degrees, there was no air conditioning and there was a single fan in one window. An ARL news release says every step they took sent clouds of fleas into the air. 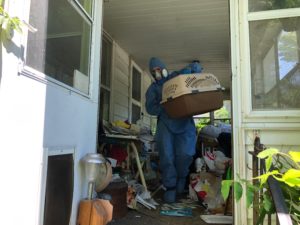 ARL staff wore haz-mat suits due to the poor air quality inside the house.

“There were 20 kittens removed initially from the home,” Stafford says. “Those kittens were very sick with upper respiratory infections. Many of them were emaciated, indicating they had not received proper nutrition.”

Another 16 adult cats have also been removed and ARL staff are still on-scene trying to pick up the remaining animals which are hiding.

“The cats had made their way into a crawl space underneath the home which literally was filled with cat feces and urine,” Stafford says. “You can imagine the stench in the house and the difficulty in getting those cats removed from that home.”

In early June, the ARL dealt with what was described as its worst animal hoarding case in more than a decade. Some 400 cats, living and dead, were removed from a property in Polk County, north of Des Moines, in rural Madrid. The owner was arrested.