You are here: Home / Sports / Iowa adds depth at guard 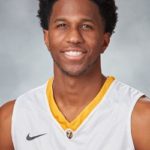 Iowa basketball coach Fran McCaffery announced on Thursday that Bakari Evelyn has signed with the University of Iowa.

Evelyn, a native of Detroit, is a graduate transfer from Valparaiso University and has one year of collegiate eligibility remaining. Evelyn, who is the first graduate transfer for McCaffery at Iowa, played the last two seasons with the Crusaders (2017-18) after playing as a freshman at Nebraska in 2016.

“We are thrilled to have Bakari join our program,” said McCaffery. “He’s a veteran who can play multiple positions. He can score and defend. Bakari will bring a presence to our program that we are excited about.”

Last season at Valparaiso, Evelyn competed in 32 games, including 14 starts. He tied for first on the team in 3-pointers made (48), ranked second in assists (68) and fifth in scoring (8.4 ppg). Evelyn netted double figures 14 times, including nine of the first 12 games. He led the team in steals and assists in six games, and scoring three times. Evelyn led all scorers with a season-best 27 points in a win at George Washington.

As a sophomore in 2017-18, Evelyn was a Missouri Valley Conference All-Newcomer Team selection and was named co-MVP of the Savannah Invitational. He was the only Crusader to start all 32 games, ranking second on the team in scoring (12.6 ppg) and first in assists (93).

“I’m excited to finally be able to join the team and get to work with the guys to learn and prepare for the upcoming season,” Evelyn said. “I chose Iowa because of the relationship I developed with coach McCaffery and (Sherman) Dillard and for the opportunity to wear the Black and Gold. It feels great to be part of the Hawkeye family.”