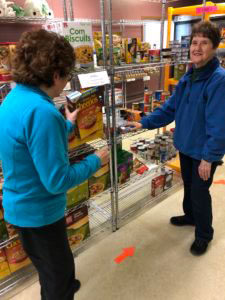 Patrons of LIFT in Lansing can shop the aisles just like in a grocery store, only the food is all free.

The Mississippi River town of Lansing in far northeast Iowa is  “The Nicest Place in Iowa” according to the Reader’s Digest.

Jeremy Greenfield, the magazine’s senior editor, says they’ve chosen one compassionate town in every state based on hundreds of readers’ suggestions. Greenfield says with all the negativity and political divides, this feature shows good things are still happening in America.

“Regardless of what they see on cable news or social media, all the fighting that’s happening right now,” Greenfield says, “what’s really going on across the country in communities just like theirs, in places big and small, is people working together to be better friends, better neighbors, better family members, to welcome strangers, and in general, to make their communities better, nicer, kinder places.”

The residents of Lansing, with a population around a thousand, realized some of their neighbors couldn’t afford to feed their families, so they created LIFT, the Lansing Iowa Food Trust.

“There’s so much food wasted in America every single day, there’s no reason anyone in our great country should ever go hungry,” Greenfield says. “The folks in Lansing have recognized that and have taken appropriate action in a way that makes their community a better place.”

Much like many food banks across the country, LIFT gives Lansing residents in need a place to get groceries for free. Under the program, each client can pick up 100 pounds of food twice a month, which they select from pantry shelves and coolers — just like they’re shopping at a grocery store.

“Hunger is not just a problem of not having enough food, obviously, there’s an issue of dignity involved,” Greenfield says. “People want to be able to provide for their families in whatever way they can, and the LIFT program does that.” Launched last fall, the program is serving about 40 households in Lansing.

The stories of Lansing and 49 other “nice” communities across the nation are available online now at the Reader’s Digest website , and readers are encouraged to vote for their favorite. The top vote-getter will win special recognition in the November issue of the magazine, which goes out to nearly 19-million monthly readers nationwide.