You are here: Home / News / Iowa Air Guard planes moved to other bases during runway project 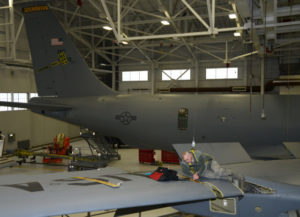 Runway construction and repairs at Sioux Gateway Airport is already affecting Sioux City’s 185th Air National Guard refueling wing. Colonel Mark Muckey, the base commander, says they have had to move their giant refueling planes to another base.

“What we did a couple of weeks ago in preparation for this, we essentially relocated the majority of our operations to Topeka, Kansas,” he says.

Until the longest runway is available for the unit’s refueling planes, the 185th also has been using Omaha’s Offutt Air Force Base for some operations. Muckey says maintenance crews have moved parts to the other locations, plus the air crews have relocated.

“Certainly the team here is ready to tackle this,” Muckey says.

Even though the massive planes have been moved, personnel at the 185th are preparing for an upcoming mission to Guam.

“That deployment is leaving out of Lincoln, Nebraska, so we’re going to get the tails up there in the next couple of days and then this weekend, we’ll actually get everybody ready here, put them on a bus down to Lincoln and then we’ll launch out of there to go to Guam, ” Muckey says. “That’s about 80 folks out of the 185th, headed over there for a couple of months.”

Colonel Muckey took over as the 185th’s commander a few weeks ago and he says shifting planes and getting airmen ready for deployment are just part of the job.