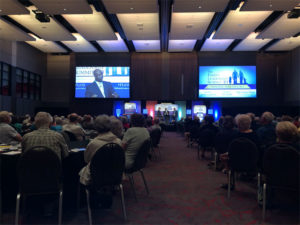 Speakers at The Family Leader conference.

Two U.S. Senators who may be Republican presidential candidates in 2024 say Christians need to be leading the nation toward racial reconciliation.

Lankford is among the speakers at today’s (Friday’s) Family Leadership Summit, an event hosted by The Family Leader, a Christian conservative group.

“There should be no prime mover stronger than the church for engaging the gospel throughout a community to show love and affection,” Lankford said.

Senator Tim Scott, the first African American elected to the U.S. Senate from South Carolina, cautioned Iowans not to buy into the idea the country is as divided as it may seem.

“If you really think about the primary driver of this new division, I think it’s people have figured out how to monetize conflict,” Scott said.