You are here: Home / News / Employees rally at McDonald’s for higher pay 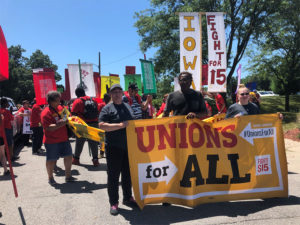 A group of employees and activists gathered at a McDonald’s restaurant in Des Moines  today for a “Fight for 15” rally — as they seek to get their minimum wage raised to $15 an hour.

Sonya Sayers, a retired employee who worked for McDonalds for more than 10 years. She says she was making $9 an hour by the time she retired and says it’s time to raise the minimum wage to a living wage. “If we can get people to get, to see that it’s a positive move. It’s not to hurt anybody. It’s to better peoples’ lives.”

The rally was staged to coincide with a presidential candidate forum at Drake University, a few blocks from the McDonald’s restaurant. Tomorrow , presidential candidate Julian Castro will join a similar rally in Davenport before he participates in the second forum in a series. The series of five forums this week is sponsored by AARP and The Des Moines Register.