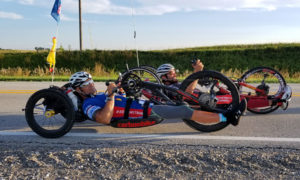 A team of 70 cyclists, all with some sort of physical disability, will pedal across Iowa on the week-long bicycle ride known as RAGBRAI starting this coming weekend.

Hannah Lundeen is the coordinator of Adaptive Sports Iowa, which is fielding its ninth annual team on the grueling ride. Lundeen says she’s impressed by all of the team members, especially the hand cyclists.

“Our legs are so much more powerful than our arm muscles,” Lundeen says. “They have to train so much more than anyone using their legs. Plus, they’re so much lower to the ground and have to power through those hills using just their arms is a feat in itself.”

Blind riders use a tandem partner.

Some team members were born with a disability while others have been involved in car accidents or have developed a debilitating disease. Some of the cyclists are visually impaired and several are blind. “Most of our blind riders are on the tanden and most of those are upright tandems,” Lundeen says. “You already see people on tandems on RAGBRAI anyway, but we have a pilot for them, so the person who can see is in the front, directing the bike.”

Short days on RAGBRAI are around 40 miles while the long days are approaching 90 miles. As many as 10,000 riders embark on the journey every year. It’s a whopper of an accomplishment in the heat of late July for people who are able-bodied — all the more so for members of this team, given the obstacles they’ve overcome. 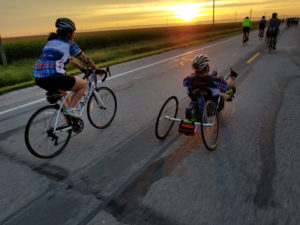 “It’s really cool to see how our team encourages each other and keeps rooting each other on,” Lundeen says. “If you see one of our riders on the side of the road, stop, even if they’re just resting, they’ll check in with them, just to make sure they’re doing okay. Give them a high five, whatever it takes to get all of our riders across Iowa.”

The Register’s Annual Great Bicycle Ride Across Iowa starts Sunday at the Missouri River in Council Bluffs and ends — 427 miles later — the following Saturday at the Mississippi River in Keokuk. Adaptive Sports Iowa is a non-profit group that provides sports and recreational opportunities for Iowans with physical and vision disabilities.