You are here: Home / News / Survey says: Iowans like to fish 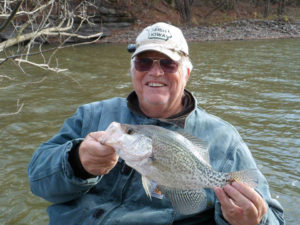 Jerry Kelley, of Davenport, with a 16” crappie he caught at the Coralville Reservoir.

A survey finds Iowa anglers fished for more than ten-million days last year, a big boost from about a decade ago.

Jeff Kopaska, the DNR Fisheries research biometrician, says they surveyed more than 16-hundred random licensed Iowa anglers about how often they go fishing and where, what species they fish for and their opinions about the agency.

The number of fishing licenses issued in 2007 versus 2018 didn’t change much, so Kopaska says those who are going fishing are fishing more.

The survey found the Mississippi River is Iowa’s most popular place to fish, followed by private ponds, the Cedar River, Clear Lake and the Des Moines River.

Kopaska says nearly two-thirds of Iowa anglers fish at lakes, and 59% fish on Iowa’s abundant rivers and streams. What are they fishing for?

“They want to catch walleyes, but they are catching panfish the most,” Kopaska says. “Panfish include bluegills, crappies, yellow perch, red-ear sunfish. So, panfish are the most common. About three-quarters of Iowa anglers catch panfish and after that it’s bass, catfish and walleyes.”

The survey found 78% of Iowa anglers agree that they are getting their money’s worth for fishing license fees, which are $20 to $25 a year.

Kopaska says, “When anglers are informed that every cent of that goes to improving their fishing experience and stocking fish and improving habitat and cleaning up lakes and rivers, they think that’s a really good investment for their dollars.”