You are here: Home / News / This year’s Iowa State Fair to feature lots of new food 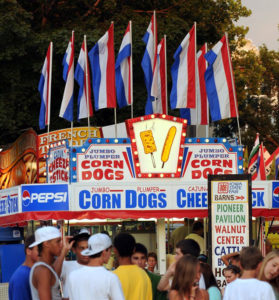 The Iowa State Fair will have 50 new foods available when the gates open in August.

Spokesperson Mindy Williamson says they try to add some new foods each year. “I think our highest number yet has been 42 — so this is the most new foods we’ve ever had and we are super excited. Our concessionaires are getting very creative and they know the benefit of having something new for fair goers,” Williamson says.

She says the new foods will join the favorites like porkchop on a stick. “It gives people the choice if they want to come try something new at the fair — or if they want to stick with their old tried and true favorite,” Williamson says.

They held a contest to judge some of the top new foods. One of the choices is “Georgie’s Roast with the Most Wrap.” She says it is the traditional pot roast with a new twist which is putting it in a wrap to make it more mobile for people to carry. Another top newbie is The Chief, which is a new creation of Navajo barbecue fried bread with slow-smoked beef brisket.

“The brisket that’s in there and the special slaw that she has on it are new,” Williamson says, “But also the Indian bread is with a special rub as well. So, it is a special taste.”

She says they recently had a delivery that signals the countdown to the final days before 2019 opening. “The butter was just delivered last Friday, so the butter cow sculpture will start working some of her magic in the next couple of weeks,” according to Williamson. “And then our companion sculptures this year are Sesame Street.”

The sculpture will make some of those characters in butter to go along with the butter cow.  She says the are excited to see the work begin on the butter cow.

“Whenever the butter gets delivered it’s official — that the Iowa State Fair is going to start shortly, “Williamson says.  To see a complete list of the new foods, go to www.iowastatefair.org.

This year’s fair begins August 8th and runs through the 18th.