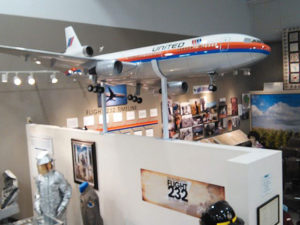 Thirty years ago today, a United Airlines DC-10 jetliner crashed-landed in Sioux City and killed 112 people, though more than 180 survived.

Flight 232 was headed from Denver to Chicago on July 19th, 1989 when a fan in an engine broke and caused a hydraulic failure. Captain Al Haynes talked with an air traffic controller about the issue. “So we have almost no controllability. Very little elevator and almost no aileron,” Haynes said. “We’re controlling the turns by power, we can only turn right, we can’t turn left.”

The plane crashed while trying to land at Sioux Gateway Airport, tumbled down the runway on fire and ended up in a cornfield. Larry Finley, executive director of the Mid America Museum of Aviation and Transportation in Sioux City, says many still honor the lives lost and the quick response of disaster services personnel.

“They heard about the problems with the aircraft,” Finley says, “Well, it started 80 miles northeast of here and we had rescue units that followed that airplane all the way back to Sioux City.” Finley says 30 years later, there’s a heightened awareness about aircraft equipment, but some critics are still waiting for changes — like requiring child safety seats on planes.

“We’ve got a number of children lost in the crash because of that,” Finley says. “We still do not have federal standards today similar to what we have for if you put a child in your car, they have to be in a safety seat up to a certain age.”

Sioux City is marking the anniversary of the Flight 232 crash at the museum today (Friday).