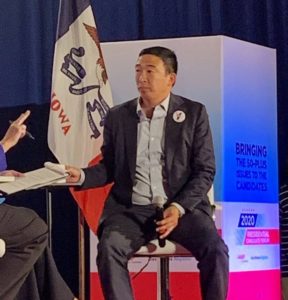 A businessman who made his debut on Iowa’s political stage nearly a year ago has made the idea of a “universal basic income” the centerpiece of his campaign.

“I’m Andrew Yang. I’m running for president as a Democrat,” Yang said to conclude his speech at the 2018 Iowa State Fair. “A thousand dollars for all.”

He calls that the “Freedom Dividend,” a universal basic income for every American.

“My campaign is based on the idea that Americans just want to have solutions to solve their problems,” Yang said during last week’s meeting with The Des Moines Register Editorial Board, “and that cash in our hands would be one of the most effective, if not the most effective solution.”

Before setting his sights on the presidency, Andrew Yang had a very different career path. He studied political science and economics at Brown and graduated from Columbia Law School. He worked as a corporate lawyer, started an education-related company, sold it and then started Venture for America. It’s a non-profit to encourage entrepreneurship.

Yang is seeking to position himself as a 21st century candidate who understands the necessity of adapting to automation and technological development.

“What happened to the manufacturing workers is about to happen to the retail workers, the call center workers, the fast food workers, and the truck drivers right here in Iowa,” Yang said last December during Progress Iowa’s Holiday fundraiser.

Yang supports the “Medicare for All” proposal that’s been hotly discussed recently on the campaign trail. Last August, he called for replacing the Gross Domestic Product with a new measurement he calls the “American Scorecard,” taking into account things like mental health and environmental benchmarks as well as the nation’s economic performance.

Yang has an extensive set of proposals on his campaign website, like his “Legion of Builders and Destroyers” — government crews to the rebuild the nation’s infrastructure and respond to natural disasters.

Since last December, Yang has been leaving Iowa audience with this catch phrase to describe himself: “The opposite of Donald Trump is an Asian man who likes math.”