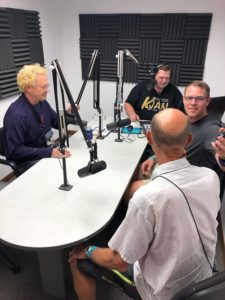 Members of a cycling team are interviewed at KJAN by Ric Hanson.

Thousands of bicyclists are making their way from Atlantic to Winterset on this second day of the statewide ride called RAGBRAI.

During the overnight stop in Atlantic, several members of Team Bad Monkey discussed some of their observations so far.

Craig Sommeren, from Chicago, says the host community residents are very friendly, but they never have enough of one type of pie.

“Twenty years on RAGBRAI and the first pie that always sells out is always rhubarb,” Sommeren says. “It should be in the RAGBRAI handbook, lots of rhubarb pie and if you think you’ve made enough, make more.”

Sommeren and teammates Zack Humphries from Kansas City and Al Hiller from Liberty, Missouri, offer some advice to those who’ve considered riding on the weeklong ride but never tried it.

“Prepare yourself for a lesson in thinking through problems,” “Patience,” and “Roll with the punches because something unexpected is going to happen.” Sommeren says he has a real worry about the Register’s Annual Great Bicycle Ride Across Iowa, which is in its 47th year.

“My concern is the average age of ridership. How is this ride going to keep going forward? It seems like it’s aging out,” he says. “How do you get young riders in this to keep it going.”