You are here: Home / News / Students in SW Iowa to build home for flood victims 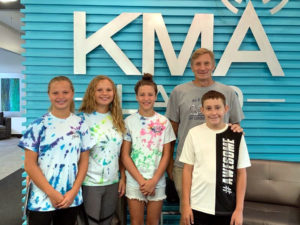 Middle school students from the Hamburg Community School District will be hard at work this fall building a new home for a family impacted by this year’s Missouri River flooding.

“We ran an ad in the newspaper and people applied for the house. These kids will be serving on the selection committee and will be interviewing the families,” Wells says. “The house will be built totally through donations. We have a lot of faith that we’ll be able to raise that much money and we’ve had some sponsors step forward that will be donating things to us. These kids want to make a difference and we’re excited to get the house started here this month.”

While middle school students would handle most of the work, Wells says jobs would also be available for elementary students. Wells says students are already learning some building trades skills as part of the district’s “maker space” activities, and that building a house will allow students to gain more skills.

“We want the kids to actually do the work,” Wells says. “Adults will be there working side by side making sure things are being done properly. Of course, we’d like a house that is fairly straight with a roof that doesn’t leak.”

Donations for flood victims are collected and handed out at a school gym. Eighth grader Hailee Barrett says that’s made an impact on them and she’s really looking forward to helping build the house.

“Just watching the families come in having to take stuff because they don’t have anything. This (project) is a big deal because we want to give back what they lost,” Barrett says.

Hailee’s sister, eighth grader Emma Barrett, says the housing project means a lot to not only the school district, but to her family as well.

“I also have people in my family who have lost their houses. So, just even having a house for people to live in and have that happiness that I can start my life again, is just really great, ” Barnett says.

Superintendent Wells says the 1,300-square foot ranch style home will be three-bedroom with a garage, kitchen, and dining room. Once the application process is finished and the student interview committee makes its selection, the home is set to sell to the selected family for 60-thousand dollars payable over a 20-year period.

Wells says the funds will be used to build another home in the future as the school hopes to make the housing project an annual event. The current timeline of the project calls for basement digging to begin in early August with the home finished by late December. Wells says the school district will gladly accept donations for the project, and that $2,000 dollars in cash has already been raised.