You are here: Home / Fires/Accidents/Disasters / Price for temporary repairs to levees hits $123M and is still climbing 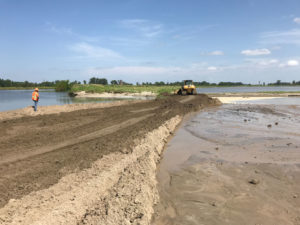 The cost to make temporary repairs to levees impacted by spring flooding along the Missouri River continues to rise.

“Additional damages are being identified as the water continues to drop and our field engineers are attempting to accurately assess the scope of damages to approximately 150 miles of damaged levees,” Leighow says.

He adds, the amount of money that’s been spent to temporarily fix damaged levees is growing.

“Currently, the cost of these efforts is around $123 million and it’s climbing,” Leighow says. “That’s $3 million more than what we had last week. As of now, we are not anticipating any budget constraints regarding recovery efforts.”

Even though funding is currently available, Leighow says there may soon be more competing claims for the money.

Releases from Gavins Point Dam in Yankton, South Dakota remain at 70,000 cubic feet per second — nearly double the average release for this time of year.

“The snowpack is all melted,” Remus says. “We haven’t necessarily seen all of it in the reservoir yet, but the main driver (of conditions) from here on out would be precipitation.”

To date, nine of the 51 damaged levees in the Omaha District have been temporarily repaired. Corps officials say it could be next spring before every breach in the system is plugged.