You are here: Home / News / Flood-damaged SW Iowa town plans September celebration as thanks to volunteers 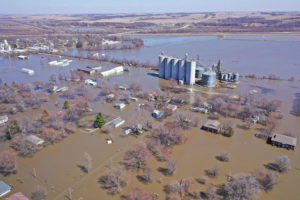 Despite months of heavy flooding in the southwest Iowa community, Hamburg officials say Popcorn Day is still on for September. The annual town festival dates back to the 1960s.

Judy Holliman, a member of the Hamburg Kiwanis — which sponsors the event, says with all of the devastation the community has endured this year, having the celebration is important to restore a sense of normalcy.

“We’ve had the barriers up and we’ve had sand on Main Street,” Holliman says. “We’ve had people leaving, families leaving and businesses leaving. We’ve been asked if we’re going to have Popcorn Day and yes, we need Popcorn Day. We need to have a diversion besides looking at water and looking at sand.”

Holliman says community members will work hard over the next six weeks to prepare the town for the celebration on September 7th.

“The mayor, city council and city workers have all said that they are going to take the sand off Main Street and take the barriers down,” Holliman says. “They want us to have a full day of Popcorn Day like we’ve had in the past.”

Another event organizer, Elaine Howard, says Governor Kim Reynolds is scheduled to serve as the parade’s grand marshal. Howard hopes Popcorn Day can serve as a thank you to the dozens and dozens of volunteers who helped the community in recent months.

“So many people have wanted to give support to Hamburg,” Howard says. “We just want them to come and join us on Popcorn Day for our celebration. The ‘Not All Heroes Wear Capes’ is very apropos for our parade title. We’ve had such wonderful volunteers that have come in since March 17th and prior to that since we were sandbagging on the 15th and 16th.”

The festival got its start in 1961 when local businessman Art Vogel, the owner of Vogel Popcorn, created a way to thank farmers who grew popcorn for his business.