You are here: Home / Agriculture / Grassley: USMCA likely on hold until new House members are ‘comfortable’ with it 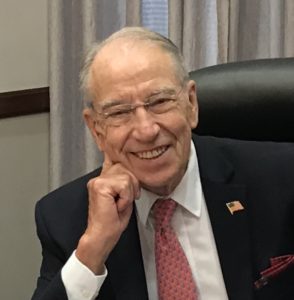 Vice President Mike Pence visits central Iowa today to discuss the importance of the United States-Mexico-Canada Agreement. Iowa Senator Chuck Grassley says he’s not aware of any timeline for the trade deal to be sent to Congress.

The measure would go to the U.S. House first where Grassley says Speaker Nancy Pelosi is still working to get her freshmen troops organized.

“Every day, you read about her having problems with these new members on this subject or that subject or some other subject,” Grassley says. “She has the same problems with the Mexico Canadian agreement with the United States and she’s got to get her people comfortable with it.”

Grassley, a Republican, says he met with Democrat Pelosi about a month ago to talk about USMCA and he says he believes she’s “very sincere” about getting it passed. He notes the House has 75 or 80 new members, the largest such class since 1974.

Vice President Pence will visit Accumold in the Des Moines suburb of Ankeny, a company that makes molds for the high-tech industry and ships globally.

“I’m certainly glad the vice president is going to Ankeny because trade is so important to Iowa,” Grassley says. “Good for the administration to see first-hand the need to do it.”

Grassley says he fully supports USMCA and he knows it has bipartisan backing, including from former Iowa Governor Tom Vilsack, who served eight years as U.S. Ag Secretary under President Obama.

“I kinda’ think that a month ago or whenever Secretary Vilsack had an announcement that he supported it and that it was good for Iowa, particularly Iowa agriculture,” Grassley says, “that probably was the best boost that it could possibly have.”

The USMCA is designed to replace NAFTA, the North American Free Trade Agreement, which went into effect in 1994.