You are here: Home / Agriculture / Hogs being shown at the Iowa State Fair will be double-checked for ASF 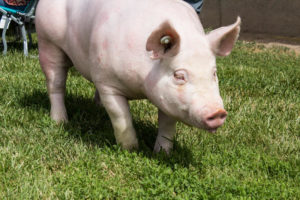 All hog exhibitors at the Iowa State Fair are being asked to have their animals checked by a veterinarian within seven days of their show date. That’s tighter than the previous 30-day inspection.

State veterinarian Jeff Kaisand says the threat of African swine fever prompted the change. The disease is devastating hog production in China and it’s also infecting pigs in other Asian and some European countries.

African swine fever doesn’t hurt people but could wipe out many farms and send pork prices soaring. Kaisand says all hogs will also get a vet check before being unloaded at the fair as another layer of precaution.

“They still could be infected with a disease and not showing any clinical signs, but what we’ve done is we’ve really narrowed-up that window,” he says, “to try and make sure we’re minimizing our risk as much as possible.”

The World Pork Expo, which attracts hog farmers and swine industry personnel from many infected countries, was canceled earlier this summer because of fears visitors might bring the deadly virus.

(Reporting and photo thanks to Amy Mayer, Iowa Public Radio)