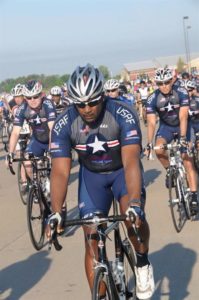 A first-timer on the Des Moines Register’s Annual Great Bike Rider Across Iowa says the “most amazing thing” he’s seen so far is the Air Force Cycling Team. Dan Srp of Camanche says there are about 200 riders on the team.

“They’re just like a swarm and they just fly by you,” Srp says, “and then all the sudden they hit the brakes because they see somebody’s broke down.”

The group’s mission is to help riders with flat tires, slipped gears and broken chains. Srp has seen quite a variety of conveyances on the RAGBRAI  route so far.

“Everything from BMX single-seat speed bicycles to unicycles to long-boards. I saw someone on roller blades yesterday, so I think equipment is kind of personal choice,” Srp said. “There are a lot of recumbent bikes out here, so it’s kind of…whatever you want your adventure to be.”

Srp rode next to a group from Ontario for part of Monday’s route. He says the out-of-staters seem to be overwhelmed by the hospitality each community along the route is showing the riders.

“Makes you really proud of your home state,” Srp says.

Today’s route is 40 miles — the shortest day of the statewide trip. Tomorrow, riders have the opportunity to take a “century loop” and Spr says he may “go for it.”

“It’s a long day to start with at 84 miles and then they give you the option of riding an additional 32, so it’s not a 100 mile day. It’s a 116 mile day and the extra 32 is around Lake Rathbun,” Srp says, “and so i’m still leaving it as a game-time decision for tomorrow, but if I still feel as good tomorrow as I do now, I’m going to take it on.”

Srp had a bratwurst for breakfast and is eating pie whenever he can. Srp says he’s heeding the advice to eat before you’re hungry and drink before you’re thirsty — so he won’t run out of energy peddling down on the road.

Srp made his comments this morning during an interview on KROS Radio in Clinton.