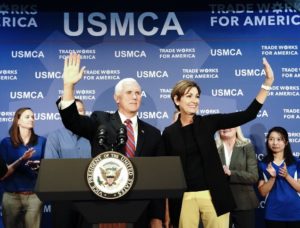 “The forgotten men and women of America are forgotten no more,” Pence said.

Pence was in Ankeny, this afternoon, touting the US Mexico Canada Agreement.

“If we pass the USMCA, Iowa’s workers and farmers are going to win like never before, but we’ve got to get it done,” Pence said. “The clock is ticking.”

Canada’s government has begun the process of ratifying the deal. In Mexico, passage requires majority support in Mexico’s senate. Once the Trump Administration formally submits the deal to congress, the U.S. House and Senate have 30 days to either ratify or reject it.

“Iowa and America need the congress of the United States to pass the largest trade deal in American history,” Pence said. “The time has come for congress to pass the USMCA.”

Mexico and Canada are Iowa’s top two trading partners. Pence urged Iowans to lobby for passage of the trade pact.

“If the American people from here in Iowa and all across this country will send a clear message to Capital Hill that we want Congress to get it done — Congress will get the USMCA done,” Pence said in Ankeny.

Pence toured Accumold, an Ankeny business that makes products that are shipped worldwide, then gave a half-hour speech to employees and state officials.

AUDIO of Pence’s remarks in Ankeny