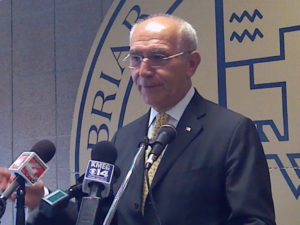 Briar Cliff University in Sioux City has been granted a temporary injunction against its former president.

The university asked for the injunction against Dr. Hamid Shirvani to prevent him from disclosing confidential information about Briar Cliff in a potential lawsuit against the institution. Shirvani threatened to sue the university in May. In asking for the injunction, current president Rachelle Karstens stated that Briar Cliff has genuine concerns that its former president may immediately disclose BCU’s confidential information as a result of his threatened lawsuit and demand against BCU.

Shirvani was hired as president in 2016, but left the school under a separation agreement in 2017 because of what he called family, personal and professional considerations.

A statement released by Briar Cliff indicated university officials are seeking to protect “proprietary” as well as confidential information. The statement went on to say “the well-being of the university’s students, faculty and staff is paramount” in the decision to pursue this legal action against the former president.