You are here: Home / Fires/Accidents/Disasters / Evacuation orders still in place in SW Iowa after floods that started in March 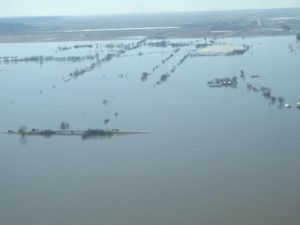 Parts of southwest Iowa’s Fremont County remain off limits to residents and motorists months after the region was first hit by Missouri River flooding.

“We’ve got places where there’s no roads out there,” Crecelius says. “There’s still some water out there in places. The county doesn’t want to be responsible if they lift the evacuation order and somebody goes out there and gets themselves hurt.”

While contractors are continuing their work to fix the roads, Crecelius says those repairs will take more time.

“The road department’s out there in a lot of places north and south of Highway 2 trying to fix the roads,” he says. “They’re hauling a lot of dirt and a lot of sand and a lot of rock out there trying to fill up the holes we’ve had out there, and trying to put roads back where they’re no longer there.”

Crecelius knows it’s an inconvenience and he’s asking residents to be patient as the repair work is underway.

“It’s going to take a lot of time and people have got to understand that,” Crecelius says. “They (road crews) can’t be everywhere all the time. We have a limited amount of resources and equipment here, so it’s going to take time, and people need to be patient to let these guys get a chance to get this stuff done.”

Likewise, he asks residents who are complaining about the temporary repairs to Missouri River levees to maintain their patience, as well.

“Those temporary repairs are to stop the water from flowing in,” he says. “They’re nothing permanent. However, that temporary repair is the platform from which the Corps of Engineers will be doing the repairs to bring it up the 25-year level by March. That is the same platform they will be using to bring the levee back to its original height prior to the flood.”

As of last week, nine of the 51 damaged levees in the U.S. Army Corps of Engineer’s Omaha District have been temporarily repaired. Corps officials recently indicated it could be next spring before every breach in the system is plugged.