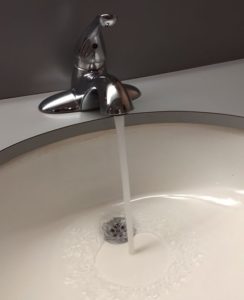 A coalition of environmental groups is calling on presidential candidates to prioritize drinking water in their policy plans.

From lead pipes in schools to nitrates in rural areas, the director of Healing Our Water-Great Lakes Coalition, says people in Iowa and nationwide are struggling to access safe and affordable drinking water.

Laura Rubin says water should be top of mind for presidential hopefuls and she urges Iowans to speak out and question the candidates when they’re in town.

Rubin says, “There is not a single issue in this election that is more important than the fact that in 2019, in the United States of America, there are millions of people who do not have access to clean, safe and affordable water for themselves, their families and their children.”

For presidential candidates, Rubin says drinking water should come before every other issue.

“While much of the presidential conversations focus on job creation and healthcare, which are vital issues, the fact is, that for the families who don’t have access to clean drinking water, all else is secondary,” Rubin says.

A recent poll of early voting states by CBS News and YouGov shows healthcare and climate change are top of mind for voters. Some political scientists are skeptical that concerns over drinking water could compete with those issues.