You are here: Home / News / Ex-Pennsylvania congressman a late entrant in 2020 presidential race 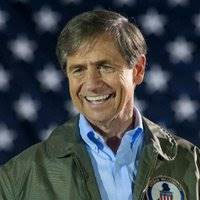 A former two-term congressman who lost two statewide races in Pennsylvania is traveling though Iowa, telling Democrats his military experience is what’s needed in the White House.

Joe Sestak made his first presidential campaign appearance in Iowa about a month ago, speaking to a handful of people in Waterloo. Sestak, who served 31 years in the U.S. Navy, is warning of the dangers of a war with Iran. Sestak argues diplomacy, not military force, is the best course of action.

“That’s why I’m concerned that too many people have occupied our White House who don’t understand how the world works, nor the limitations of what our military can do,” Sestak said during an interview with Radio Iowa’s O. Kay Henderson.

In 2010, Sestak angered party leaders with a successful primary challenge of U.S. Senator Arlen Specter, who had switched from the Republican to the Democratic Party.

“A senator who had tried to humiliate, if you might remember, Anita Hill, who had brought a sexual harassment claim against now Supreme Court Justice Clarence Thomas,” Sestak said.

Sestak wound up losing that General Election race and failed again in his 2016 bid for the U.S. Senate.

“My take is, if you can really stand against your pary and run, I think that’s what this nation needs, is someone who’s accountable for people,” Sestak told Radio Iowa.

Sestak said he decided to run for president after his 18-year-old daughter was cleared following a second round of treatments for a rare form of brain cancer. That experience, he said, leads him to oppose “Medicare for All” and the end of private insurance.

“To mandate that I needed to change my doctors in year two, as my daughter’s going through brain surgery, because a politician says it’s going to work? No,” Sestak said.