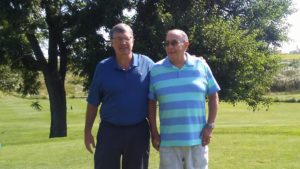 A Hinton man is alive today, thanks to fast action from his golfing partners.

Sixty-eight-year-old Dick Beaulieu was golfing in Hinton on July 2nd and had just hit a shot onto the green when he collapsed on the course. Dean Burger explains what happened next.

“Threw my clubs down and ran up the hill. The other gentleman did the same thing and there was no hestitation,” Burger said. “It sounds funny, but we just went on automatic…and we got ‘er done.”

Beaulieu had a slight pulse when the two golfers got to him, but then he stopped breathing.

“At that point, we put him on his back and started doing CPR. I started first,” Burger said. “The other gentlemen started second. We just alternated.” 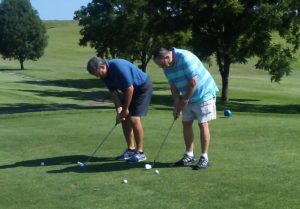 It about 10 minutes for EMTs to arrive. Beaulieu’s memory of what happened “is pretty vague.”

“I hit a shot on number 3 — probably the best shot I’d hit all year. The next thing I remember is waking up in the hospital,” Beaulieu said. “They said I coded. As we got to the end of the lane, they stopped and shocked me, got me going again. This is all what I’ve been told.”

Beaulieu, who is the former mayor of Hinton, had suffered a minor heart attack 19 years ago — at the same golf course.

“Cardiologist said I was a good candidate for a pacemaker, a defibrilator and like most people I put it off and put it off — and if your cardiologist tells you need one, you really ought to get one from I’ve found out the hard way,” Beaulieu said. “…Poor old heart decided it was time to quit. Thank goodness a couple of guys were there who knew what to do.”

Beaulieu got a pacemaker on Friday, July 5th and was released from the hospital the next day.