You are here: Home / Fires/Accidents/Disasters / Northwest Iowa girl rescued after getting stuck at top of water tower 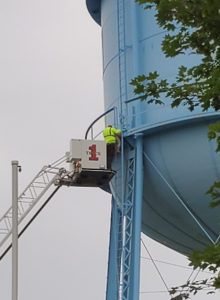 A seven-year-old girl escaped injury after she climbed up a water tower in Estherville this  morning and got stuck at the top.

Estherville Police were called shortly after 10 a.m. about a missing girl with autism. Police officers immediately began searching the neighborhood on foot and with a drone, but at about 10:30, a family member  spotted the girl on the water tower.

The tower is near the family’s home.

“She was at the top of the water tower, just hanging on,” eh says. “We didn’t know she had her head stuck until we got somebody up there in the aerial.” 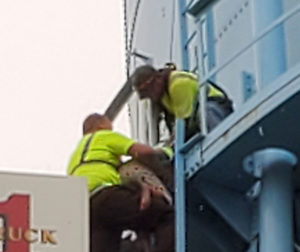 Crews had to use a saw to free the girl.

“They were attempting to get her off and then figured out her wasn’t going to come out the way it went in,” the chief said. “…That’s when they made the decision…that would be the fastest way.”

After the girl was freed and brought down from the tower, she was checked over by EMTs and paramedics, then released to her parents.