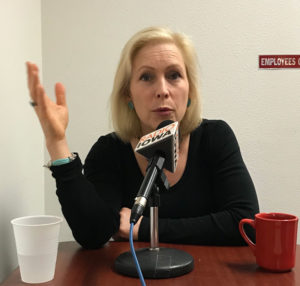 Gillibrand says the goal is to drastically cut greenhouse gas emissions as soon as possible and work toward 100 percent “clean energy” in the next decade.

Gillibrand unveiled her climate plan in Cedar Rapids yesterday. She estimates her plan would cost $100 billion and she wants fossil fuel companies to help pay.

A handful of presidential candidates are in the state through the weekend. New Jersey Senator Cory Booker is in western Iowa, with a midday stop in Greenfield. South Bend, Indiana Mayor Pete Buttigieg will be in Ankeny later today to discuss his plan to membership and protect freelancers and others who do short-term contract work. Former San Antonio Mayor Julian Castro will campaign on the Meskwaki Settlement near Tama this afternoon.