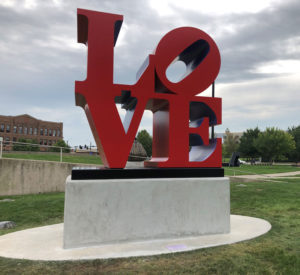 A copy of the sculpture that represents one of the enduring images of the “love generation” of the 1960s and ’70s is now residing in the heart of Iowa’s largest city.

It’s four giant, red aluminum letters, an L and a sideways O atop a V and an E. First created by pop artist Robert Indiana in 1964, the LOVE logo gained wide appeal as a postage stamp in 1973. Jordan Powers, spokeswoman for the Des Moines Art Center, says there are dozens of these 1,200 pound sculptures around the world.

“The editions all vary slightly,” Powers says. “The colors may vary, so different cities may not have the exact same colors that we have, but the ones in San Francisco and London are of the exact same edition as the one we have here now in Des Moines.”

The sculpture sits on an elevated concrete pedestal, and while love may be boundless, LOVE measures eight-by-eight feet and is four-feet deep.

“The exterior is red, as are most of Robert Indiana’s pieces of LOVE. The interior is what changes amongst the editions typically,” Powers says. “Ours is…all four interiors of each letter are all almost like a deep periwinkle. It’s a blue with a hint of purple in there.” Some of the pieces in Des Moines’ sculpture garden have become very popular backdrops for locals and visitors updating their social media profile photos, but Powers predicts LOVE may quickly outshine all the others.

“We certainly imagine that this is really going to become an icon for the city of Des Moines,” Powers says. “We can envision engagements happening there. I imagine there will be lots and lots of wedding photos taken there.”

As the familiar sculpture was set in place downtown by a work crew on Thursday, a sizeable crowd gathered to watch.

“And as soon as those barricades came down, folks were flooding in,” Powers says. “You saw people making their hands into little hearts in front of it, and families taking photos in front of it. We envision a lot of selfies in LOVE’s future here in Des Moines.”

The artist, Indiana, died last year. He maintained that a single word could be a viable subject of art by harnessing its emotional charge and the power of language.

LOVE is the 31st piece in the capital city’s Pappajohn Sculpture Park, which is marking its 10th anniversary. Powers couldn’t reveal the value of LOVE but noted that in the ten years since the sculpture park was created, the value of the surrounding properties has lept from $35 million in 2009 to more than $400 million.