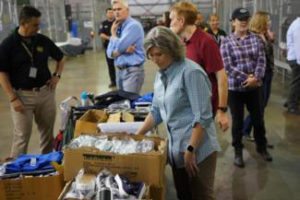 Ernst, a Republican from Red Oak, visited McAllen, Texas and the surrounding areas this past weekend.

“It is uncomfortable for those migrants. They are receiving three hot meals a day. Many of those are being catered in from various restaurants — but still an uncomfortable situation to be in,” Ernst says.  She says the agents are doing what they can to take care of the migrants.

“They’re very, very, attentive to the children. So the children, any time they want a juicebox  or water, whatever it its, the peanut butter crackers….all those items, all the have to do is  request them, and they get them,” according to  Ernst.  Ernst says the migrants get medical attention when they are brought in.

“Clean facilities there, it is very tight though. They did explain to us they are not used to the types of migrants coming,” Ernst says.  Ernst says one temporary facility costs 20 million dollars every month to run and they are overtaxed and more facilities are needed. She says they are seeing some 15-hundred people illegally crossing the border every day.

Ernst says there needs to be changes — but a bill proposed by the chair of the Senate Judiciary Committee to close the loopholes in the asylum process has been put off by Democrats.  Ernst says she expects the chair to bring that bill forward.

“Perhaps the Democrats will see we are going to mark up this bill without their input and maybe they will see we are serious about getting to work on the border situation  and come to the table,” she says. “But so far they have just continually put him off.”  Ernst says the country can’t afford the continued cost of an open border and Democrats need to help make changes.

“What they’re doing is they’re using the human beings, those migrants as pawns, and we can’t continue to do that,” Ernst says.   Ernst made her comments during her weekly conference call with reporters.